The Austin Organ, Opus. #2743, A.D. 1991 incorporates the latest technology and principles of fine organ building that have evolved through the centuries. The mechanical layout and visual design were the work of Frederick L. Mitchell, with the tonal disposition developed in consultation with Organ Committee consultant, Emeritus Professor John W. Harvey.

"As one of America's finest church organs, the new Austin organ at First United Methodist Church will serve as a model for fine organ building anywhere. Its glorious voice will bring joy and inspiration for many generations to come, as it sings its jubilant praises for the glory of God." 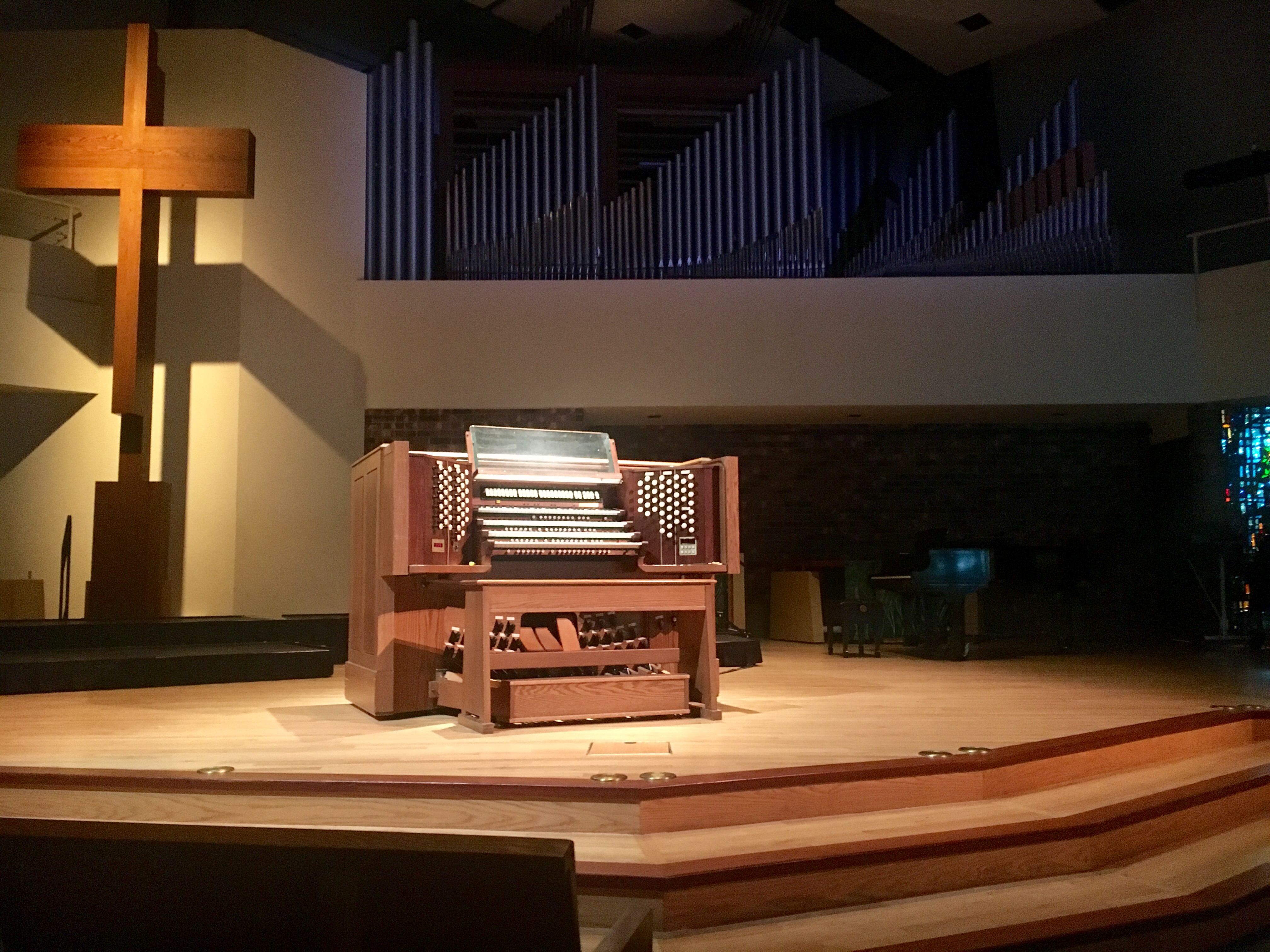 The visual design of the organ was planned to allow all visible pipes of the Main Organ – except for the horizontal Festival Trumpet – to stand on one level. They are functionally arranged so that they make a graceful sweep from high to low and from right to left, directing the eye to the Cross. The same motif is also displayed by the 500 pipes of the Antiphonal Organ.

The organ contains 46 stops (or voices or tone qualities), 59 ranks and a total of 3434 individual pipes. The most important stop is the Principal: A non-imitative tone quality known as “organ sound.” Of the 46 stops in the organ, 17 are principals, 12 are individual stops, and 5 are compound stops with 3 or 4 ranks each.

Color stops, of which we have 23 arranged in four tonal groups, include: 3 strings, 3 hybrids, 3 orchestral reeds, and 14 flutes, appearing in a great variety of strengths, pitches, and sonorities.

For brightness and power there are six stops of brasses (reeds).

The contrasts are great! The softest, most gentle stops are the Flauto Dolce and its partner, Flauto Celeste. The strongest and loudest stop is the dramatic 85 pipe Festival Trumpet. Sixty-one of its pipes, made of copper, are mounted horizontally at the top of the organ. The 32-foot Contra Posaune, its 56 pipes standing unseen behind the reredos, contains the lowest pitches in the organ. The highest pitches come from the 1 1/3 foot Larigot.

The 21 Deagan Chimes are not new. They were first installed in the old Estey organ in our former sanctuary. In 1974 they were reinstalled in the Wicks organ, rededicated along with the new sanctuary, and retained for use in the new Austin organ.

The two large expression boxes, contain 25 stops, 30 ranks, and 1830 pipes, plus the Chirmes and the 9-bell Zimbelstern. Opening and closing the louvers give a high degree of dynamic contrasts. Twenty-one stops, 29 ranks, and 1604 pipes stand in the open, without expressive control.

The console, with four manuals and pedal, controls the entire organ. It contains 86 drawknobs controlling the 46 stops, 3 tremulants, Chimes, Zimbelstern, and 16 divisional couplers; 28 tilting tablets operating the couplers; 69 combination pistons; and 28 combination toe studs. A special feature of the console is the “memory” system, which allows up to 20 organists to have their own personal set of stop combinations.

Ross Cowing was recently interviewed by Brent Johnson for the Organ Media Foundation. Here is their video featuring an in depth look at our Austin Organ.